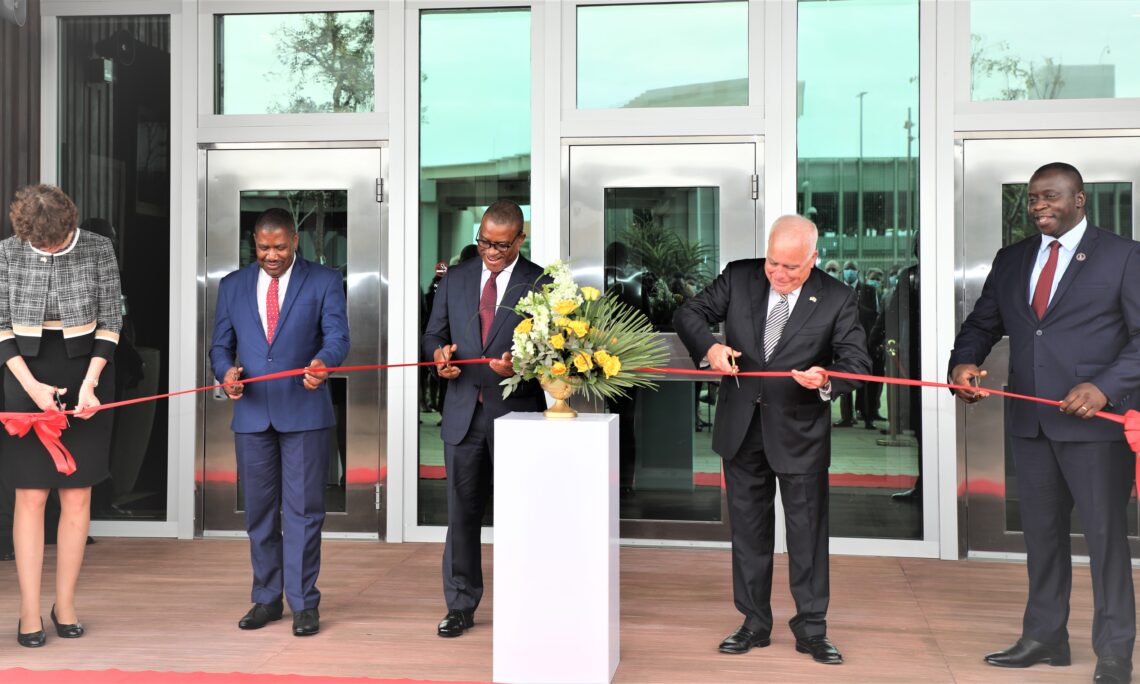 “Today we are making history.  As we inaugurate this beautiful building, we recognize the enduring nature of our bilateral relationship,” said U.S. Ambassador Dennis W. Hearne during the inauguration ceremony.  “This new Embassy building is a concrete example of the importance of the United States government’s work in Mozambique, and how important Mozambique’s success is for the region and for the world,” he said.

The new complex provides a secure, modern, sustainable, and innovative platform for U.S. diplomacy in Mozambique and houses all U.S. Government agencies with the exception of the Peace Corps.  The five-year construction project created more than 1,000 local jobs and injected more than US$22 million into the local economy.  The 10-acre compound models the latest energy efficient features.  The Embassy building recycles its air every 15 minutes, and the compound has its own irrigation system.  The ultra-high-performance concrete fins encircling the Embassy are reminiscent of the wood carvings of the Makonde tribe in northern Mozambique and provide enough shade for the large building to reduce the amount of energy needed to keep it cool.  Sustainable landscaping that represents the three major biomes of Mozambique – dunes, savannah, and forest – are integrated to create public areas and outdoor meeting spaces for employees and visitors.

American and Mozambican artwork is featured inside the new Embassy building.  Goncalo Mabunda from Mozambique and Alice Hope from the United States created two of the largest, most breath-taking installations.  They both used recycled materials that are normally discarded and oftentimes contribute to pollution and transformed them into beautiful sculptures and thought-provoking works.   This building and its artwork show how much American and Mozambican cultures have in common, how the United States-Mozambique relationship is growing, and how culture connects peoples around the world.

This new, state-of-the-art building is a clear example of the strong and growing relationship between the United States of America and the Republic of Mozambique.  In addition to more than US$500 million in annual assistance programs, the U.S. Government is the largest bilateral vaccine donor to Mozambique, having donated nearly 640,000 single-dose Johnson & Johnson vaccines to date, and invested more than $62 million worth of support for Mozambique’s response to the COVID-19 pandemic.  U.S. Government development assistance is robust in the health sector, and supports effort to help children learn to read, improve farmers’ incomes, protect Mozambique’s incredible biodiversity, and much more.  The U.S. Government is developing a second Millennium Challenge Corporation compact that will substantially improve the agriculture and transportation sectors, is bolstering Mozambique’s capabilities to combat terrorism and respond to the resulting humanitarian crisis in Cabo Delgado, and is supporting strong democratic institutions and a free press.