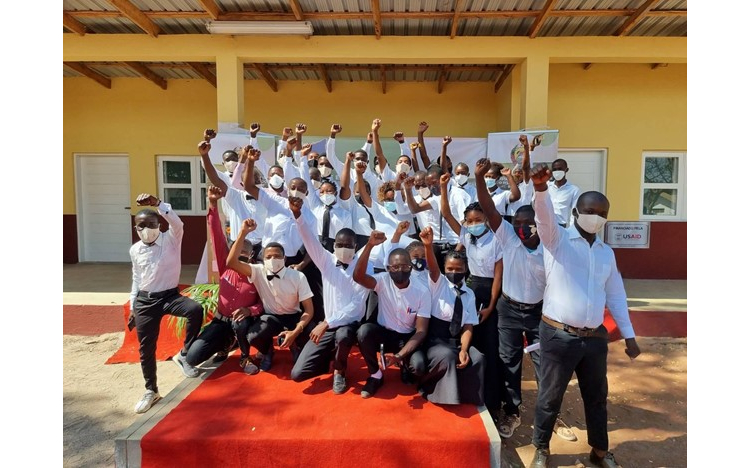 Students celebrate the reopening of the Bilibiza Agricultural Institute in Ocua, Chiúre district.

July 19, 2021 – The U.S. Government, through the United States Agency for International Development (USAID), inaugurated the reopening of the Instituto Agrário de Bilibiza on July 9. In partnership with the Instituto Agrário de Bilibiza, USAID rehabilitated several buildings on campus and welcomed back 300 students after it closed following a terrorist attack on the campus in January 2020. Now located in Chiúre district in Cabo Delgado province, the rehabilitated institute will provide its students with a quality education that will give them the knowledge and skills to work in the agricultural sector.

In January 2020, Islamic State-Mozambique (ISIS-M) attacked the town of Bilibiza and destroyed the Instituto Agrário de Bilibiza. Prior to the attack, the institute was the primary training location for agricultural technicians in the province and was a source of pride for the local community and the region. Established in 1982, thousands of graduates from Cabo Delgado have gone on to work in government and the private sector, where they introduced farmers to improved agricultural techniques and provided guidance to local communities on how to improve their agricultural productivity.

In February 2020, the Instituto Agrário de Bilibiza found a safe haven in Chiúre district. Given the continued insecurity in the north, the institute decided to permanently relocate to this site. They were given an unused governmental facility, but the buildings were in severe disrepair, which prevented the institute from reopening for more than one year. USAID’s Tuko Pamoja program, which supports livelihoods in Cabo Delgado, worked with the institute to complete rehabilitation by July, just in time for the school to reopen its doors to 300 students who will continue their studies.

The building rehabilitation and resumption of classes are the first steps in the longer-term recovery of the Instituto Agrário de Bilibiza. The institute plans to use the surrounding land as demonstration agricultural plots, so the students can practice their skills outside of the classroom.

The United States invests more than $100 million in Cabo Delgado for a range of community resilience and humanitarian assistance programs. Promoting community resilience and improving livelihoods are critical components of the broader U.S. Government assistance in Mozambique. In close collaboration with the Government of the Republic of Mozambique, the U.S. Government provides more than $500 million in annual assistance to improve the quality of education and healthcare, promote economic prosperity, and support the overall development of the nation.