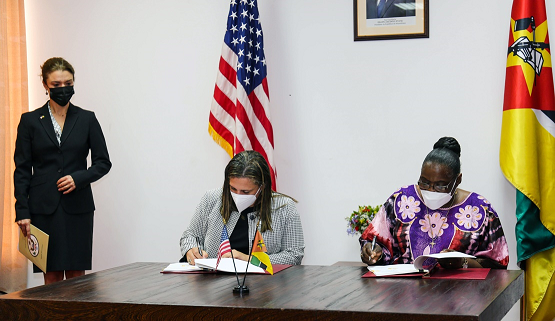 March 31, 2022 – The U.S. Government’s lead development agency, United States Agency for International Development (USAID), officially renewed its partnership with the Government of the Republic of Mozambique (GRM) during a signing ceremony of the Development Objective Grant Agreement.  The five-year agreement governs how USAID and the GRM partner to implement USAID’s foreign assistance funding of $1.5 billion to promote a more peaceful, prosperous, and healthy Mozambique.  The Minister of Foreign Affairs and Cooperation Verónica Macamo Dlhovo signed on behalf of the Government of Mozambique and Chargé d’Affaires at the U.S. Embassy in Mozambique Abigail Dressel and USAID-Mozambique Mission Director Helen Pataki represented and signed for the United States.

USAID’s Country Development Cooperation Strategy for 2020-2025 provides a roadmap for activities realized under the five-year agreement.  Developed with key stakeholders, including the Government of Mozambique and other international donors and development organizations, the strategy focuses on three primary objectives: healthier and better educated Mozambicans; diversified and inclusive economic growth; and increased resilience of vulnerable populations.

At the signing, Chargé d’Affaires Dressel said, “Today, we formally renew our development partnership with Mozambique and once again pledge to stand alongside Mozambicans to find innovative solutions to current development challenges and capitalize on the potential of this country.”

As part of the U.S. Mission to Mozambique, USAID works alongside the U.S. Department of State, the U.S. Centers for Disease Control and Prevention, the U.S. Department of Defense, and the U.S. Peace Corps to provide broad development support in Mozambique.  In close collaboration with the Government of the Republic of Mozambique, the U.S. Government provides more than $500 million in annual assistance to improve the quality of education and healthcare, promote economic prosperity, and support the overall development of the nation.