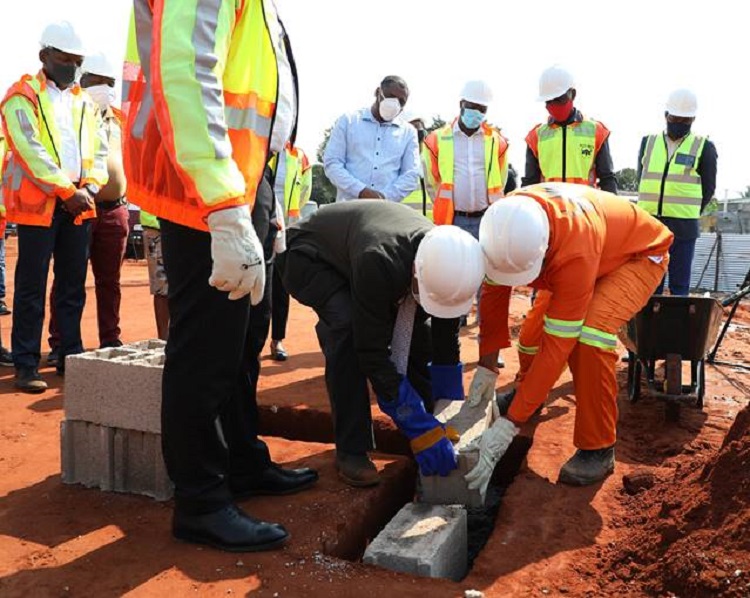 Representatives from the U.S. Embassy and the Government of Mozambique in the groundbreaking ceremony for the Matola Santos Hospital

August 25, 2020 – Today, representatives from the United States Embassy participated in a groundbreaking ceremony for the Matola Santos Hospital, a U.S. Government-funded construction project that will greatly expand patient access to HIV treatment and other essential services.

The Matola Santos Hospital should be complete by the end of November 2020 with a total cost of $730,000.  The construction will include a reception area, consultation room, laboratory, staff restrooms and kitchenette, a public restroom, upgraded electrical power transformer and electrical grid, as well as the addition of a water catchment tank.

The U.S. Government considers the Matola Santos Hospital to be a critical investment that will improve the country’s ability to control the national HIV epidemic and respond independently to other disease threats.  Current data reflects the impact of the HIV epidemic in Matola and the need for comprehensive care and treatment.  In July 2020, 143,873 people were in HIV treatment in Maputo Province, 64,871 of whom were in the district of Matola, and 7,265 of whom were seen at Matola Health Center C and Matola Santos Mobile Clinic with clinical technical assistance from Ariel Glaser Foundation Against Pediatric AIDS (ARIEL).

The facility is a demonstration of the U.S. Government’s focus on expanding PEPFAR-funded infrastructure throughout Mozambique, totaling over $7 million since 2017.  PEPFAR (the President’s Emergency Plan for AIDS Relief) is a U.S. government initiative to address the global HIV/AIDS epidemic, and its projects benefit over 22 million people currently on HIV treatment.

These projects and funding build on a foundation of more than $500 million in annual assistance the U.S. Government provides to improve the quality of education and healthcare, promote economic prosperity, and support the overall development of Mozambique.