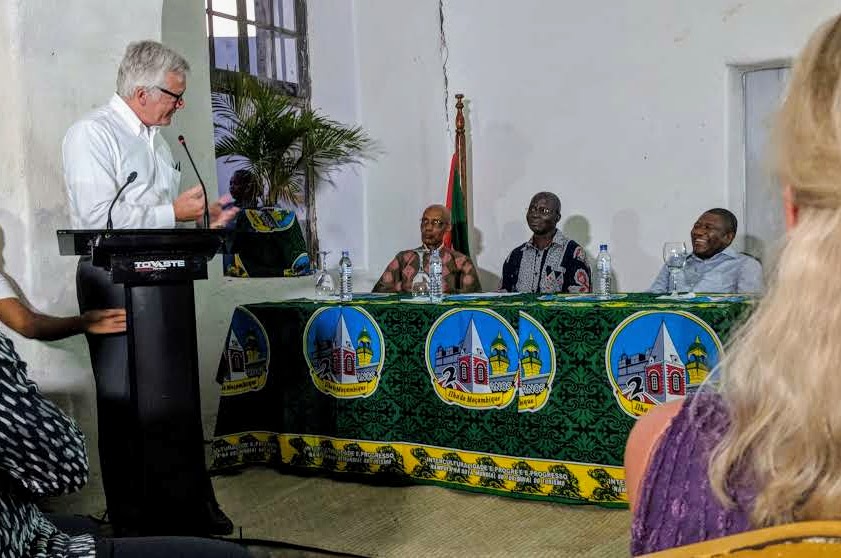 September 18, 2018 – ILHA DE MOÇAMBIQUE – Ambassador Dean Pittman yesterday joined his excellency President Filipe Nyusi, the Rector of Eduardo Mondalane University Dr. Orlando Quilambo, and the people of Ilha de Moçambique to inaugurate the Center for Archeology, Research, and Resources at the São Sebastião Fort.  The construction of the Center was funded by a $188,700 grant from the United States Government’s “Ambassador’s Fund for Cultural Preservation.”

The Center’s development was directed by UEM professors Drs. Yolanda and Ricardo Teixeira Duarte, with the goal of providing a location for Mozambican and international scientists to conduct archeological research in a modern facility.  In addition to offering researchers access to specialized tools and workspaces, the Center will also serve as an exhibition location for discoveries and research findings.   The principal archeological investigation on the island today, the “Slave Wrecks Project,” looks to Mozambique Island’s past as a historical center in the trade of African slaves and attempts to locate and preserve the remains of slave ships that sunk near the island.

The U.S. Mission to Mozambique is proud to partner with the government of Mozambique, the University of Eduardo Mondlane, George Washington University in the United States, and the Smithsonian Institution to protect this important cultural site.  The history of the slave trade at Mozambique Island is important to the global narrative of how our modern world developed, and many American citizens have personal ties to this tragic part of history.  Preserving and sharing this history will allow Americans to reconnect with their past through heritage tourism to Mozambique.  As more and more Americans are drawn to the island’s shores, Mozambique’s tourism industry will contribute to the country’s economic stability.  This partnership is an optimal example of shared cooperation and diplomacy, and will greatly benefit the citizens of both nations.