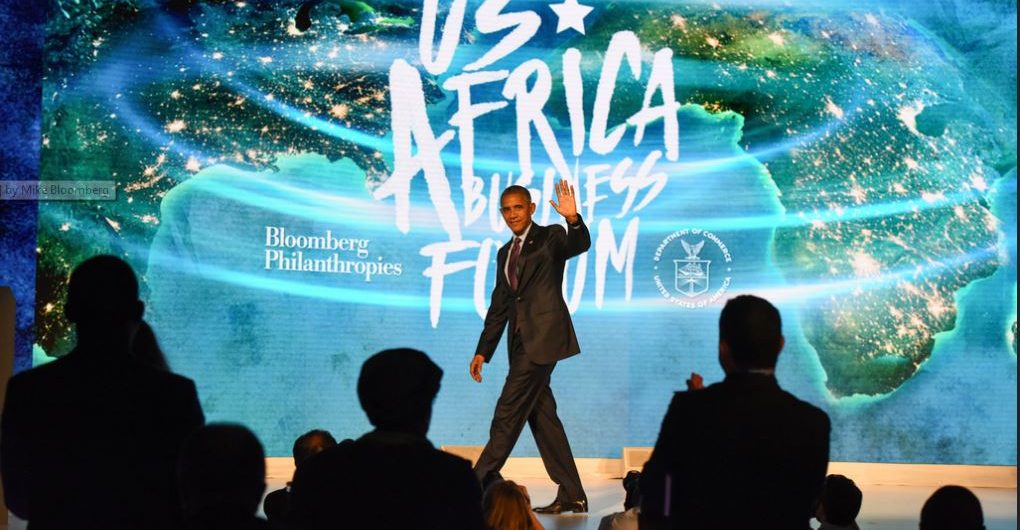 President Obama speaks for the audience during the U.S.-Africa Business Forum in September 21, 2016.

As President, I’ve worked to transform our relationship with Africa so that we’re working together, as equal partners.  I’m proud to be the first American President to visit sub-Saharan Africa four times; the first to visit Ethiopia and speak before the African Union; the first to visit Kenya — which I think was obligatory.  I would have been in trouble if I hadn’t done that. (Laughter.)  I believe I’m also the first American President to dance the Lipala in Nairobi — or to try to dance the Lipala.

And wherever I’ve gone, from Senegal to South Africa, Africans insist they do not just want aid, they want trade.  They want partners, not patrons.  They want to do business and grow businesses, and create value and companies that will last and that will help to build a great future for the continent.  And the United States is determined to be that partner — for the long term — to accelerate the next era of African growth for all Africans.

And that’s why, over the past eight years, we’ve dramatically expanded our economic engagement.  With your support, we renewed the African Growth and Opportunity Act for another decade, giving African nations unprecedented access to American markets.  We launched Trade Africa, so that African countries can sell goods and services more easily across borders — both within Africa and with the United States.  We created Doing Business in Africa campaign to help American businesses — including small businesses — pursue opportunities across Africa. And under Penny’s leadership, nearly 300 American companies have taken trade missions to Africa, with more than 8,000 African buyers attending U.S. trade shows.

If you are an African entrepreneur or an American entrepreneur looking for more support, more capital, more technical assistance, there has never been a better time to partner with the United States.  Commitments from the Export-Import Bank and the U.S. Trade and Development Agency have doubled.  OPIC investments have tripled.  Nearly 70 percent of Millennium Challenge Corporation compacts are now with African countries.  And we’ve opened up and expanded new trade and investment offices, from Ghana to Mozambique.  Through our landmark Power Africa initiative, the United States is mobilizing more than 130 public and private sector partners — and over $52 billion — to double electricity access across sub-Saharan Africa.

Meanwhile, our Global Entrepreneurship Summits in Morocco and Kenya and our Young African Leaders Initiative are giving nearly 300,000 talented, striving young Africans the tools and networks to become the entrepreneurs and business leaders of the future.  We’ve got some of those outstanding young people here today.  And two years ago, I welcomed many of you to our first ever U.S.-Africa Business Forum, where we announced billions of dollars in new trade and investment between our countries.

And you can see the results.  American investment in Africa is up 70 percent.  U.S. exports to Africa have surged.  Iconic companies — FedEx, Kellogg’s, Google — are growing their presence on the continent.  You can hail an Uber in Lagos or Kampala.  In the two years since our last forum, American and African companies have concluded deals worth nearly $15 billion, which will support African development across the board, from manufacturing to health care to renewable energy.  Microsoft and Mawingu Networks are partnering to provide low-cost broadband to rural Kenyans.  Procter & Gamble is expanding a plant in South Africa.  MasterCard will work with Ethiopian banks so that more Ethiopians can send home remittances.

These are all serious commitments.  New relationships are being forged, and I’m pleased that, altogether, the deals and commitments being announced at this forum add up to more than $9 billion in trade and investment with Africa.

So we are making progress, but we’re just scratching the surface.  We have so much more work that can be done and will be done.  The fact is that, despite significant growth in much of the continent, Africa’s entire GDP is still only about the GDP of France.  Only a fraction of American exports — about 2 percent — go to Africa.  So there’s still so much untapped potential. And I may only be in this office for a few more months, but let me suggest a few areas where we need to focus in the years ahead.

We have to keep increasing the trade that creates broad-based growth.  In East Africa alone, our new trade hubs have supported 29,000 jobs and helped increase exports to the United States by over a third.  So we need to keep working to integrate African economies, diversify African exports, and bring down barriers at the borders.  Since we’re approaching two decades since AGOA was first passed, we’re releasing a report today exploring the future beyond AGOA, with trade agreements that are even more enduring and reciprocal.