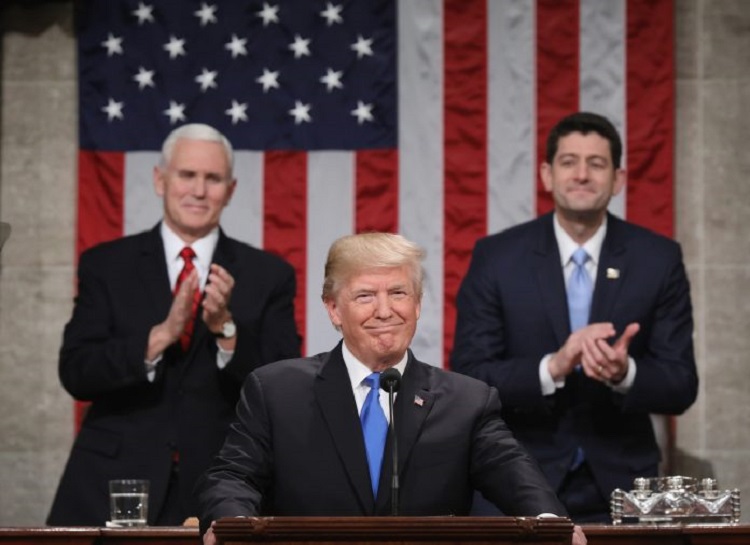 President Trump makes his first State of the Union speech. Behind him are Vice President Pence (left) and Speaker of the House of Representatives Paul Ryan.

President Trump delivered a strong message to his country and the world in his State of the Union address on January 30, saying that as Americans regain strength and confidence at home, “we are also restoring our strength and standing abroad.”

From fair trade to fighting ISIS to preventing North Korea and Iran from becoming nuclear powers, the president said the United States will stand up for freedom and challenge rogue regimes, terrorist groups, and rivals that challenge U.S. interests and values.

“We know that weakness is the surest path to conflict, and unmatched power is the surest means to our true and great defense,” he told lawmakers, Cabinet officials, Supreme Court justices, diplomats and citizens who filled the chamber in the U.S. Capitol for his first State of the Union speech.

After laying out his domestic agenda, the president spoke of his vision for a vigorous foreign policy that not only protects the United States and its allies but makes the world safer.

“The coalition to defeat ISIS has liberated very close to 100 percent of the territory just recently held by these killers in Iraq and in Syria,” he said, “but there is much more work to be done.”

He drew applause for recognizing Jerusalem as the capital of Israel.

“As we strengthen friendships all around the world, we are also restoring clarity about our adversaries,” Trump said.

He pledged “total American resolve” to stop North Korea’s “reckless pursuit of nuclear missiles [that] could very soon threaten our homeland. We are waging a campaign of maximum pressure to prevent that from ever happening.”

As presidents since Ronald Reagan before him have done, Trump paid tribute to a succession of ordinary people who have performed heroic deeds or suffered wrongs that his administration is trying to right. Among them were a North Korean defector and the parents of Otto Warmbier, the American college student who was arbitrarily imprisoned in North Korea and died after being returned to the U.S. in a coma.

On international trade, Trump said, “From now on, we expect trading relationships to be fair and, very importantly, reciprocal.”

“We will work to fix bad trade deals and negotiate new ones.”

“As long as we are proud of who we are and what we are fighting for, there is nothing we cannot achieve,” he said as he wrapped up his speech.

“Our families will thrive. Our people will prosper. And our nation will forever be safe and strong and proud and mighty and free.”