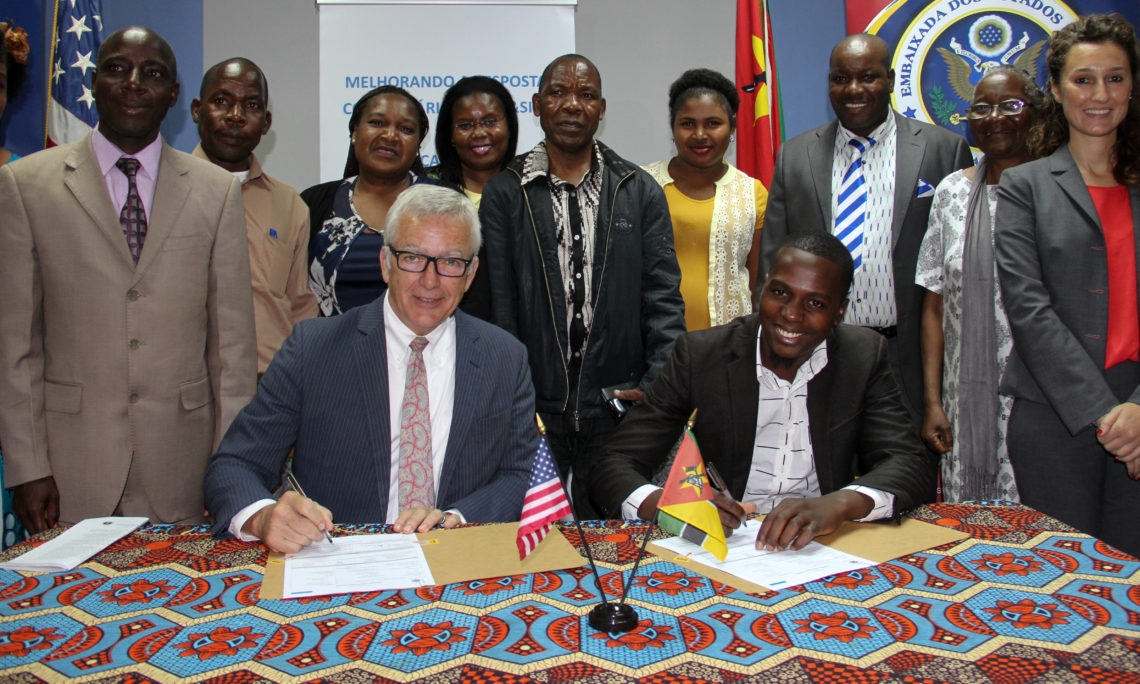 The Ambassador Pittman on Thursday, 21 September 2017, approved 30 community-based projects belonging to Mozambican organizations that contribute to the control of the HIV / AIDS epidemic in the priority districts of Mozambique.

Funded by PEPFAR (The U.S.President’s Emergency Plan for AIDS Relief ), the program disbursed about US $ 809,000 to support important actions in the areas of support for Orphans and Vulnerable Children, care and support for adults living with HIV / AIDS and initiatives to reduce new infections in adolescent girls and young women.

This funding will contribute to improving access to health services and quality of life for people affected and infected by HIV / AIDS.

To this end, 30 organizations previously competed for funding through the submission of proposals describing their organizations’ plans to contribute to the control of the epidemic, which currently afflicts almost 1.9 million Mozambicans.

Annually, through the PEPFAR community projects program, the US Embassy provides financial support to empower local organizations in HIV / AIDS prevention, sharing awareness messages about the epidemic, and life skills training and income-generating activities for people affected and infected by HIV / AIDS.

Good morning everyone and welcome to the U.S. Embassy’s PEPFAR community grants signing ceremony.  I would like to offer a special welcome to our implementing partners who have travelled here from all over Mozambique.  Thank you all for taking the time to be here today.

The President’s Emergency Plan for AIDS Relief, also known as PEPFAR, is now entering its fourteenth year of bringing hope to millions of people living with or affected by HIV/AIDS across the world.  Through PEPFAR and other programs, together with our many partners, we have achieved enormous success on HIV prevention, care and treatment globally – and while we celebrate these achievements, we also recognize that much work remains to be done.

Many collaborative efforts have contributed to reversing the increase in infection rates and rolling back the spread of HIV/AIDS.  Millions of HIV positive people are receiving treatment and living longer; orphans are receiving the care and support they need; HIV positive mothers are giving birth without transmitting the virus to their babies; and families affected by HIV/AIDS are benefiting from income-generating activities supported by the American people.

Mozambique has contributed greatly to these accomplishments.  The United States has worked very closely with the Government of Mozambique, local non-governmental organizations, and the Mozambican people in the fight against HIV/AIDS, which currently afflicts about 1.9 million Mozambicans.  More than  800,000 children have been orphaned by HIV.  Since 2004, the United States has invested more than US$3 billion to combat HIV/AIDS in Mozambique.  Just last week I travelled to Zambézia to take a first-hand look at what we’ve achieved in the fight against HIV/AIDS in that province, and to launch, together with the Ministry of Health and civil society partners, the next phase in our provincial collaboration in fighting the epidemic.

The progress that has been made as a joint result of our financial investments and the time and diligent efforts of our many implementing partners is encouraging. Today, there are literally hundreds of thousands of Mozambicans who are alive because of PEPFAR and our partnership with the Mozambican government and civil society.  Three in four Mozambicans receiving treatment receive it because of American support.  When PEPFAR began nearly fifteen years ago, only about 5,000 people were on treatment; today more than 787,000 Mozambicans receive lifesaving treatment through the PEPFAR program.

The United States provides more than $400 million in annual assistance to Mozambique related to HIV/AIDS.  As part of that package, our Embassy team administers grants that support community-based projects related to HIV/AIDS.  Each year, through the PEPFAR community grants program, the U.S. Embassy provides financial assistance to empower local organizations to prevent HIV/AIDS transmission, spread public awareness about the disease, and provide vocational training and income generating activities for people living with or affected by HIV/AIDS.  This year, we have awarded grants to you, our partners – many of whom are here today – to undertake these crucial activities throughout Mozambique in the districts most severely impacted by the HIV/AIDS epidemic.

We are proud to have awarded almost $809,000 to support your impressive work in areas such as providing support services for orphans and vulnerable children, offering adult care and support for people living with HIV/AIDS, and undertaking initiatives to lower adolescent girls and young women’s risk of HIV/AIDS infection .

The work that has been done through these small grants to date underlines the unique value and role of community organizations in achieving epidemic control. As new grantees, we rely on you to continue this tradition, ensuring that the projects on which you embark directly support prevention and link people to testing, to treatment, and to services.

I take great pride in noting that the services that you all provide to communities are leading to an AIDS Free generation in Mozambique.  I congratulate you all on your 2017 Small Grants Awards.