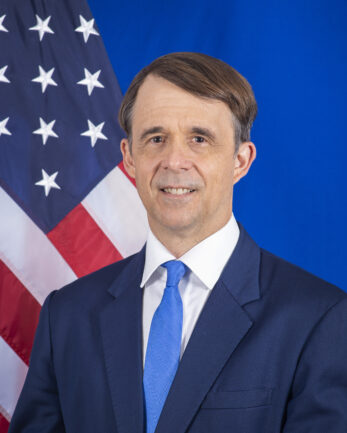 U.S. Ambassador to the Republic of Mozambique

Peter Hendrick Vrooman is the United States Ambassador to the Republic of Mozambique.   Ambassador Vrooman was nominated by President Joseph R. Biden Jr. on July 27, 2021 and confirmed by the Senate on December 18, 2021.  He was sworn in on February 11, 2022 and presented his credentials to President Filipe Jacinto Nyusi on March 3, 2022. Ambassador Vrooman is a career member of the U.S. Senior Foreign Service, class of Minister Counselor, and a diplomat since 1991.

Ambassador Vrooman most recently served as the United States Ambassador to the Republic of Rwanda, from 2018 to 2022.  He has also served as the Chargé d’Affaires and Deputy Chief of Mission of the U.S. Embassy in Addis Ababa, Ethiopia.  Prior to that he served as the spokesperson for the U.S. Embassy in New Delhi; Director for Iraq on the staff of the National Security Council in Washington, DC; Deputy Political Counselor in Tel Aviv and at the U.S. Mission to the United Nations.  He also worked at the U.S. embassies in Baghdad, Beirut, and Djibouti, as well as the U.S. Liaison Office in Mogadishu, Somalia.  In Washington, he was a Watch Officer in the Department of State’s Operations Center and the Desk Officer for Algeria in the Bureau of Near Eastern Affairs.

A native of New York State, Mr. Vrooman graduated from Harvard College with an A.B. in Social Studies and earned an M.S. in National Resource Strategy from the National Defense University’s Industrial College of the Armed Forces, now known as the Eisenhower School for National Security and Resource Strategy.  Prior to joining the Foreign Service, he worked as the special assistant to the President of the American University in Cairo.  He speaks Portuguese, Kinyarwanda, Arabic and French, and is married to a photographer.  They have a son and a daughter.