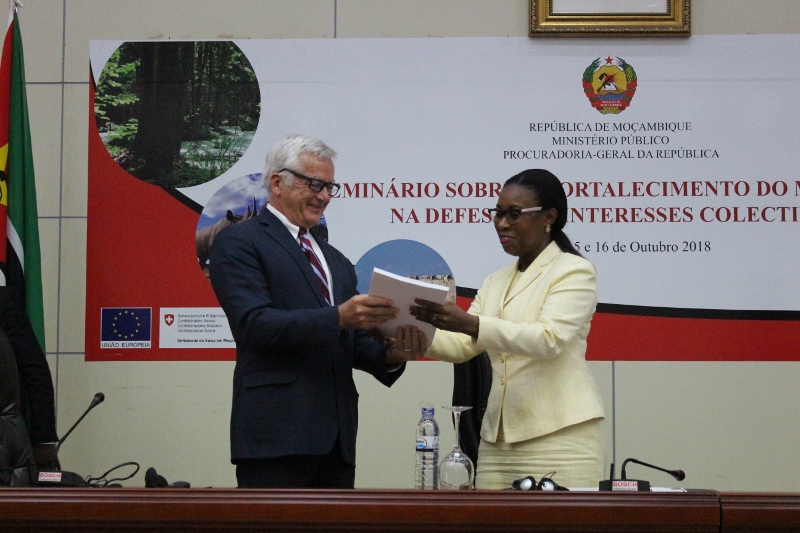 Dean Pittman, US Ambassador to Mozambique, makes a symbolic delivery of the Legal Handbook: Manual for Investigation and Criminal Procedure on Wildlife Crimes to Dr. Beatriz Buchili, Attorney General of the Republic of Mozambique, at a ceremony held on October 16, 2018.

October 17, 2018 – The Attorney General and the United States Ambassador today launched the new Manual for Investigation and Criminal Procedure on Wildlife Crimes at a formal public event at the Attorney General’s Office in Maputo.  The manual was developed, with support from the United States through the U.S. Agency for International Development (USAID), as a training tool and reference for investigators and prosecutors on how to successfully prosecute organized crime cases involving wildlife trafficking.  The population of Mozambique’s wildlife, especially elephant and rhinos, has decreased significantly due to poaching and wildlife trafficking.  Over the past 50 years, Mozambique’s elephant population decreased from 50,000 to less than 10,000, and rhinos are extinct.

The purpose of the legal manual and training is to improve support for personnel dedicated to investigating and prosecuting organized crime cases with a focus on wildlife trafficking.  The first training on the use of this legal handbook took place at Gorongosa National Park on September 17, 2018, and two more trainings will be held for prosecutors, investigators, and wildlife law enforcement officers in the provinces of Niassa and Gaza.