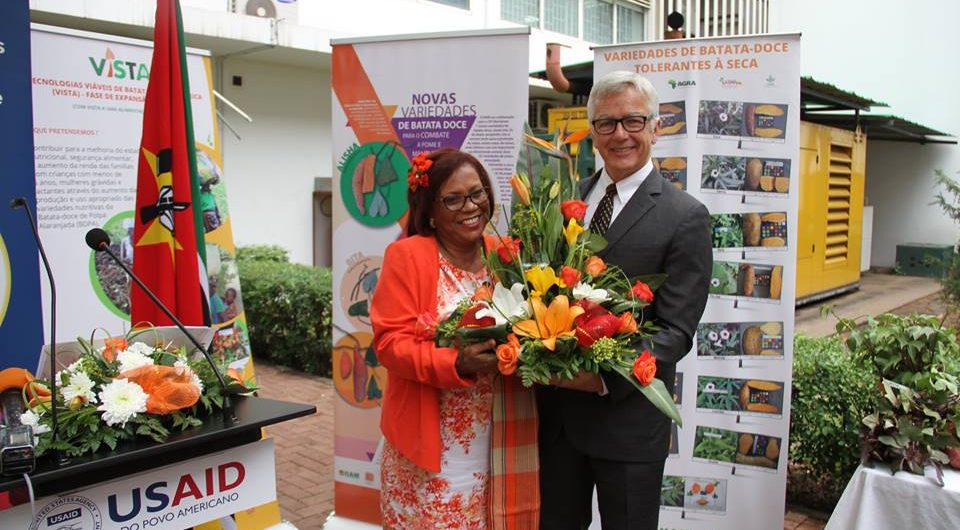 Ambassador Dean Pittman offers flowers to Dr. Maria Andrade in recognition of her work and for the Prize.

Maria Andrade’s OFSP breeding research began in 1997 in drought-prone areas of Sub-Saharan Africa with intensive adaptive trials that led to the release of nine drought-tolerant varieties distributed to farmers in Mozambique in 2001. Her “value-chain” approach incorporated both socio-market and agro-processing strategies to ensure a sustainable program for the long term to address food insecurity, malnutrition, and income generation.

With USAID support, Dr. Andrade conducted the first large-scale field testing of 58 OFSP varieties from the U.S., China, Kenya, and Tanzania, and was able to identify eight varieties with high yields. She and the Mozambique government partnered with USAID again in 2000 following a devastating flood in Mozambique to distribute these top-yielding varieties to 123,000 households. Andrade has also partnered effectively with the Mozambique Ministry of Agriculture, and Bouis and HarvestPlus. Her passionate advocacy has resulted in the OFSP program in Mozambique becoming what one donor described as the “calling card” for biofortification work in Sub-Saharan Africa.

Andrade was born in 1958 in Sao Filipe Fogo, Cape Verde Islands, which lie off the coast of West Africa, when that country was still a colony of Portugal (it gained independence in 1975). Her father worked on the shipping docks and her mother was a housewife, raising Maria and her two sisters and seven brothers. Even though her parents had little formal schooling, education was an important part of the family culture as this was seen as a means to a secure future. In that regard, after finishing primary school in Fogo, she went to live with an older brother on Santiago Island from 1972-78 so that she could attend a good high school.  After graduating, she taught high school math and science for two years in her home country before being identified by USAID to go to college in the United States, where she studied agronomy at the University of Arizona with support from an African American Institute scholarship.

Maria received her B.Sc. in 1984 and M.Sc. in Plant Genetics in 1985 from the University of Arizona. With support from USAID, she earned her Ph.D. in Plant Breeding and Plant Physiology from North Carolina State University in 1994. A mentor during that time helped orient her efforts toward assuming a leading role in improving food security in the developing countries of Africa. She developed a deep interest in biofortified crops after working on root crops in 1985 and conducting her Ph.D research on the sweet potato, which, she learned, had the potential of providing significant nutritional benefits to malnourished children and women.

A turning point in Maria’s career occurred when she was given the opportunity to join the International Institute for Tropical Agriculture and work in Southern Africa. This exposed her to the international agricultural research environment, broadened her perspective, and showed her the important role she could play in food security. Her interest in this area was reinforced after learning that nearly 70 percent of the children in Mozambique suffered from vitamin A deficiency, and her subsequent opportunity to work in that country as a plant breeder of biofortified OFSP.