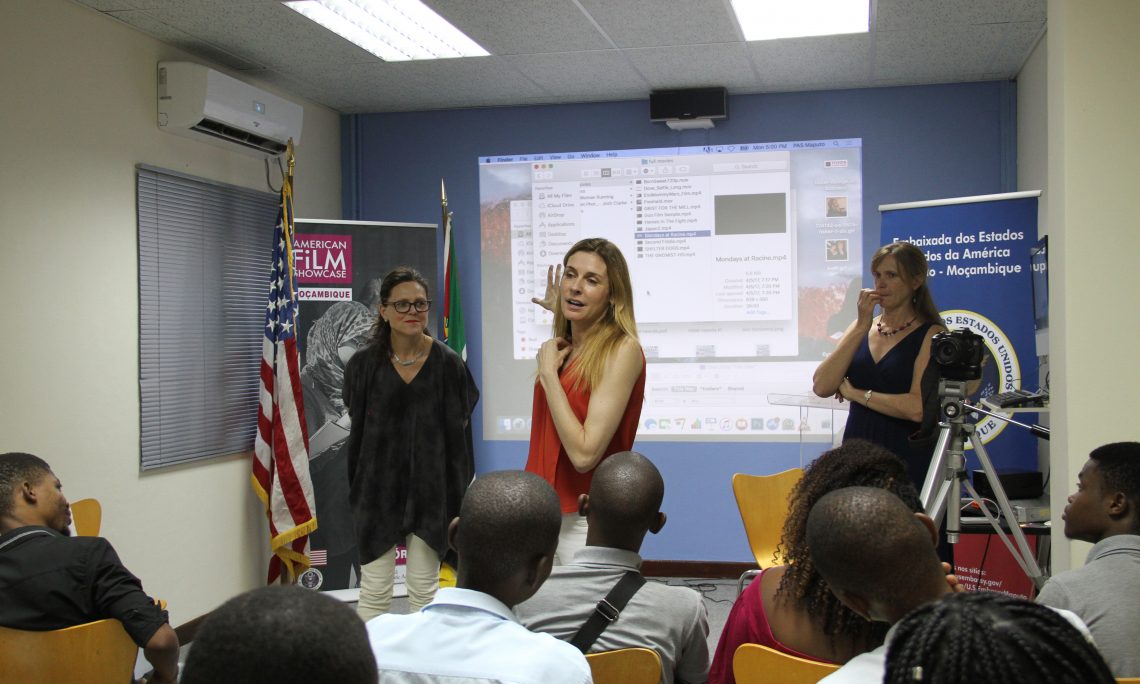 Two American female filmmakers recently spent a week in Mozambique working with filmmakers and students to instruct on filmmaking and using art for social change, as well as to spur discussion of entrepreneurship and what it can contribute to Mozambique.

Cynthia Wade brought her film “Generation Startup” to Maputo.  The film tells the story of six young Americans starting companies or working for startups.  It shows the difficulties and the victories of entrepreneurship.  Entrepreneurship is an important engine for economic growth, and aspiring Mozambican entrepreneurs were able to see examples in the film and pose questions to Mozambican entrepreneurs and Wade, the director of the film.  YALI alumna and entrepreneur Juscelina Guirengane met with students at Universidade Politecnica, and future YALI participant and entrepreneur Titos Munhequete met with students at Universidade Sao Tomas to share their experiences in business and answer questions.

Irene Taylor Brodsky brought her film “Saving Pelican 895” to share with students at Instituto de Formacao dos Professores de Chibututuine.  The film demonstrates how U.S. laws to protect the environment hold companies liable for rehabilitation in case of an accident that damages land or wildlife.

Together the filmmakers worked with students and Mozambican filmmakers to explore different methods and types of documentary filmmaking.  Documentary films are an effective way to bring attention to societal issues and to drive solutions.  Wade discussed how her film “Freeheld” sparked debate about LGBT rights that affected change in the U.S. that led to the right of same-sex couples to marry.

The filmmakers presented and exchanged ideas with about 500 students and professionals during their week-long visit.

The visit of the filmmakers was part of American Film Showcase.  The program provides short- and long-form documentary films by American filmmakers for use by Embassies.  The U.S. Embassy in Mozambique will continue offer screenings of American documentaries both at our American Cultural Center and with local partners over the course of the next year.