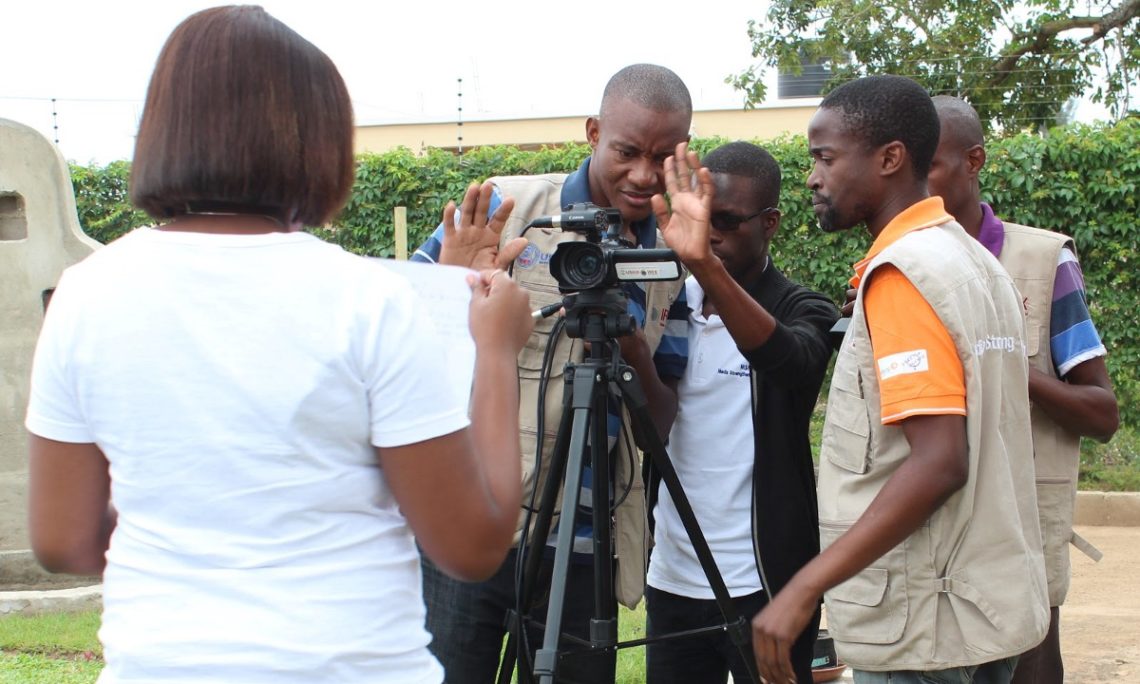 In Mozambique, traditional TV channels don’t present information in an accessible format for the deaf. For deaf citizens like Sousa Camanguira, not only does this make them feel excluded and marginalized, but it also jeopardizes their ability to access all information on an equal basis as others.

Sousa wanted to make sure the deaf community in Mozambique has the same opportunity to access information as the hearing community — so he founded the USAID-supported TV Surdo (“Deaf TV”), a station that includes sign language in all programming.

“I don’t want my daughters to go through what I went through,” he said.

When watching TV with his mother, Sousa remembers that “TV listeners hear jokes and start laughing. We, the deaf, don’t laugh. When we ask others what they are laughing about, they just say, ‘Wait, we’ll explain it later.’ We are left without information, and that is a discouragement.”

Supporting media platforms to provide information for everyone

Living in the capital city of Maputo, Sousa was born hearing, but after suffering from meningitis lost it at 5 years old.

When he was 6, he began attending a school for the deaf, but only learned that he was deaf at 12 years old when he realized he was wearing a hearing aid.

“Nobody told me anything,” Sousa said, in regard to his parents and teachers. “I grew up with hearing people, playing with them. I only found out [that I was deaf] when I wanted to know what the hearing aid device they gave me was. Nevertheless, I continued to behave normally, because I am normal.”

Sousa began to work on the concept for TV Surdo in 2008, at the age of 30. Although he had the support of many institutions, it was through IREX’s Mozambique Media Strengthening Program, funded by USAID, that his dream came true. The program supports Mozambican professional and community journalists and their media platforms to provide high quality information to citizens, while promoting accountability and development.

“We wanted people to understand that we, despite being deaf, can practice the same activities as people with hearing, and even can contribute to the development of the country,” said Sousa, who is also the general manager of TV Surdo.

Before the IREX training program, the small group of journalism professionals of TV Surdo — who all knew each other from the deaf community — had no experience with computers, editing videos or writing scripts. Now, they say, they are confident to work independently.

In February 2017, TV Surdo officially started broadcasting its weekly news program through the largest independent media group in Mozambique. The stories cover all topics in the mainstream media, but also focus on issues of particular interest to the deaf community.

Sousa’s youngest son, who is 4 years old and is hearing, communicates very well in Mozambican sign language, due in part to watching the programs on TV Surdo. Sousa calls him “the little interpreter” who facilitates communication between them and the rest of their extended family that can hear.

With his son’s help, Sousa says that his daughters no longer suffer from communication issues.

Sousa’s goal for TV Surdo is to have mainstream media that is fully accessible to people who are deaf in all provinces in Mozambique, so they can better understand the world and be informed just like everyone else. He also hopes to continue to have many viewers, both deaf and hearing, so they can learn sign language, and help create a more inclusive society throughout the country.

In Mozambique, USAID works to promote diversity and the inclusion of people with disabilities, such as Sousa, in all aspects of life, including work, education, democratic participation and entrepreneurship.

USAID is committed to disability-inclusive development that empowers the over 1 billion people, or about 15 percent of the world’s population, that live with some form of disability. Societies that are inclusive of their diverse populations are more likely to be democratic, participatory and equitable.