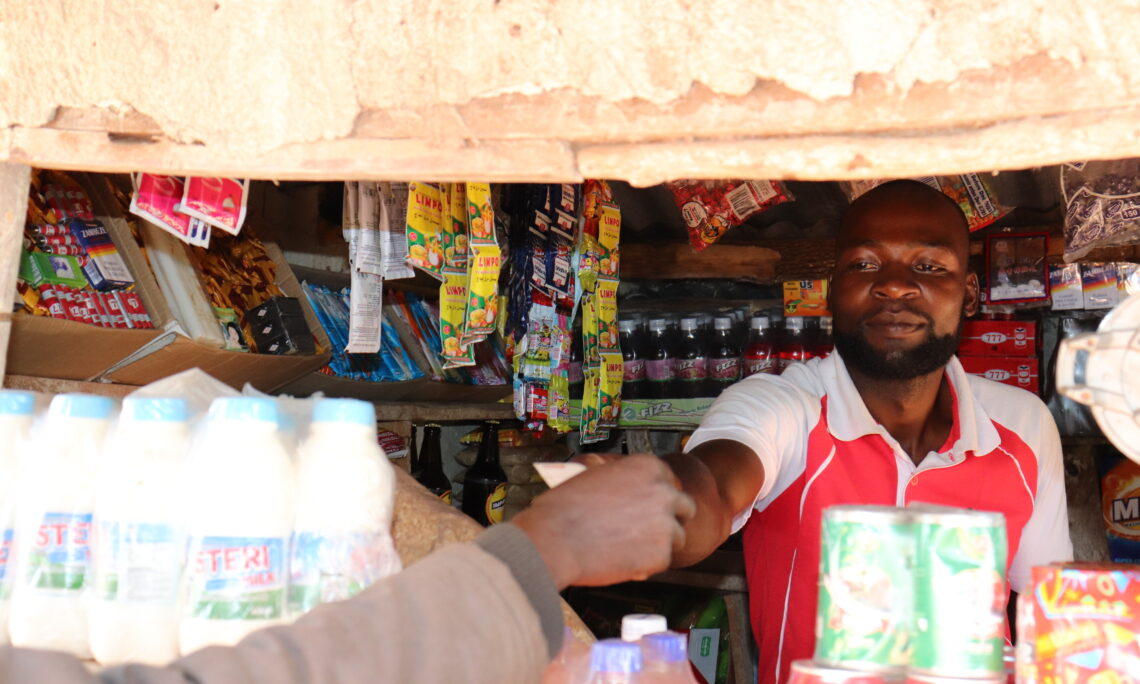 Elias serving a customer at his establishment where he sells various useful items for his community.

The sun shines brightly, and the weather is mild in the village of Ngomai, Gondola district, Manica province, in central Mozambique. In the midst of this rural area, you can hear the amplified sound of a popular national song, even though there is no electricity in the area.  The small radio works using electricity from a solar panel installed by Elias Jornal Matica, 30 years old.

Elias is not always at his stall, because customers are scarce. It is during these breaks that he takes the opportunity to take care of his small farm where he grows several crops.

“I have been doing this business for 5 years. I travel 24 kilometers to Chimoio where I buy the products. I don’t have a fixed income because the business is variable, but it’s enough to survive, especially because I also farm,” says Elias.

While we were talking to Elias, his wife, Isabel Joaquim, and his daughter, Rosária Elias, approached us, where they enthusiastically welcomed the child’s godmother, Alice Rosa.

“My wife felt unwell and went to the hospital, where she was attended by sister Alice. She advised her to get tested for HIV, to which she agreed. The result was positive. Then Alice invited me to also get tested, and my result was also positive. In the same month we started taking HIV medication, Isabel got pregnant,” said Elias, remembering the experiences of 2020.

With adherence to ART, Isabel Joaquim started feeling better, and Elias never even felt sick. But the changes in the family were even greater.

“We were struggling to get pregnant. We looked for a solution to our problem in many ways, including with traditional healers, but we couldn’t find any. But in the same month that we started antiretroviral treatment, my wife became pregnant. That’s why Alice is very special to us: she resolved our problems”, says the trader.

“I welcomed the couple and advised them to adhere to the antiretroviral treatment.  I explained that if they were in good health, they had a better chance of being able to conceive and have a healthy child. Thank God when they started the treatment, the pregnancy came”, said Alice, who now has many other goddaughters and friends in the communities because of her work at the health center and the relationships she has developed with patients.

Alice Rosa (sister Alice) has been a Health Counselor since 2016 and works at the Military Health Center in Chimoio. Among several other services, the center offers Antiretroviral Treatment Services (S-TARV).

The Chimoio Military Health Center has about 1,500 patients in HIV treatment, of which 77% are aware of their viral load, and almost all of whom are virally suppressed. In Mozambique, the President’s Emergency Plan for AIDS Relief (PEPFAR) of the U.S. government funds the US Department of Defense (DoD) and its implementing partner JHPIEGO to support approximately 25 health centers of the Mozambican Defense Forces (FADM) to provide HIV treatment to approximately 30,000 patients, almost all of whom are virally suppressed.

This initiative has increased the number of HIV-positive patients starting ART, including HIV positive pregnant women on ART, thereby reducing the risk of mother-to-child transmission of HIV.  It has also made it possible to hire 90 Health Counselors who make a valuable contribution to the health program by offering testing services to clients, offering counseling services to strengthen adherence, sponsoring patients, actively seeking out patients who interrupt treatment and serving as points of contact with various patients in treatment.

The couple now receives their HIV medications quarterly and leads a normal life. Their daughter has had two HIV tests and the result were negative for HIV.

“My daughter is healthy. I would like her to become a doctor when she grows up, to help save lives,” Elias projects.

Elias and his family are part of the approximately 1 700 000 (one million seven hundred thousand) people on HIV treatment in Mozambique and are leading normal and productive lives thanks to consistent adherence to treatment.

The U.S. Government works closely with the  Government of Mozambique, with funding from the US President’s Emergency Plan for AIDS Relief (PEPFAR), to support the Centers for Disease Control and Prevention (CDC), U.S. Agency for International Development (USAID), U.S. Department of Defense (DOD), the Peace Corps and various implementing partners to implement the National Strategic Plan for the Response to HIV and AIDS at national, provincial, district, and local levels, with the goal of controlling the HIV epidemic by 2030.