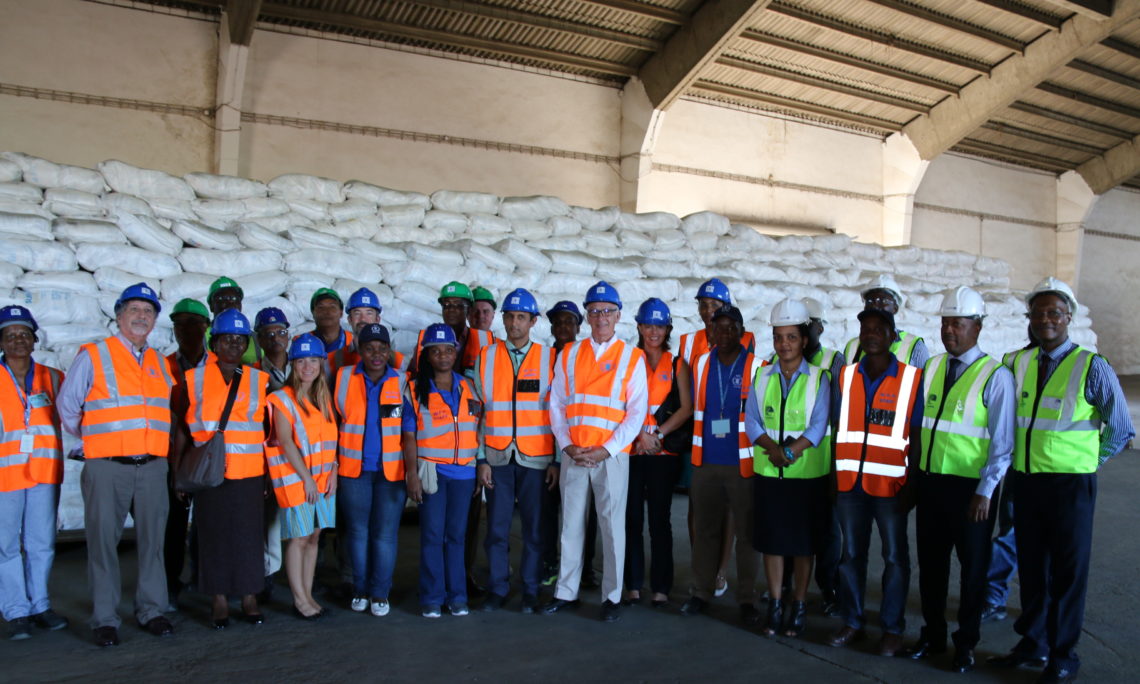 Among the largest multi-purpose container terminals in Mozambique, the Port of Beira is a center for receiving World Food Program (WFP) articles.

The United States Ambassador, Dean Pittman visited, from 16th to 18th of May 2017 in Sofala Province, different sites that are receiving support from the U.S. Government through its Agency for International Development (USAID), the U.S. President’s Emergency Plan for AIDS Relief (PEPFAR) and the Centers for Disease Control and Prevention (CDC), as well as from the American military cooperation. In addition to four hundred million dollars (US $ 400,000,000) in annual development assistance, the U.S. Government provided an additional US $ 42 million in disaster assistance throughout Mozambique to respond to the effects of prolonged drought, recent floods and cholera. Food distribution, health and sanitation support as well as agricultural assistance are some of the many ways the U.S. Government is contributing to help provide services to the people who need it most. in need in Mozambique.

The U.S. Government also works with our Mozambican counterparts to improve maternal, newborn and child health, as well as increase resilience against diseases such as HIV/AIDs, Malaria, and Tuberculosis.  During this trip the U.S. Ambassador will visit health facilities and speak with beneficiaries of these services.

During his stay in Sofala, Ambassador Pittman met with the Sofala Provincial Governor, Maria Helena Taipo, the Mayor of the Municipality of Beira, Daviz Mbepo Simango, the District Administrator of Dondo, Graça Júlia Raúl Correia Joaquim and visited the following places: (1) The World Food Program Warehouse in Beira Port, (2) Military Health Clinic Laboratory in Matacuane, (3) Food for Assets Activity in Dondo District (4) and Food Distribution to victims of disasters in Dondo District.

World Food Program Warehouse in the Port of Beira

Among the largest multi-purpose container terminals in Mozambique, the Port of Beira is a hub for World Food Program (WFP) commodities.  Due to its capacity of 400,000 TEUs (Twenty-foot Equivalent Units) per year, this facility has received more than 150,000 metric tons of food for Mozambique, Malawi, Zambia, and Zimbabwe since last year.  WFP implements activities funded by the U.S. President’s Emergency Response for AIDS Relief (PEPFAR) and by Food for Peace (FFP). These activities work to increase the capacity of vulnerable Mozambicans to better cope with food scarcity, malnutrition, and natural disasters, such as drought.  In Sofala alone, U. S. Government assistance benefits more than 70,000 families.

USAID is supporting World Vision, in partnership with Food for the Hungry, to implement a $10 million emergency food security program.  Food for the Hungry oversees operations in the Sofala province reaching over 13,000 households. This program insures that target communities receive support to meet immediate food and nutritional needs. Through Food for Assets individuals in a particular community work to create, rehabilitate or maintain shared public infrastructure and are paid in the form of sorghum and dried legumes.

Food Distribution Activity in the Nhavingo Community of Dondo District

USAID provides funding to World Vision to provide emergency food and nutrition assistance to drought affected populations in Mozambique. Together with partner Food for the Hungry, this project is targeting tens of thousands of beneficiaries in the districts of Dondo and Caia which were heavily impacted by the El Nino-induced drought since 2015. In addition to food distribution, the U.S. Government supports the provision of vouchers for the purchase of local food, the distribution of seeds, repair of infrastructure, and temporary shelter.