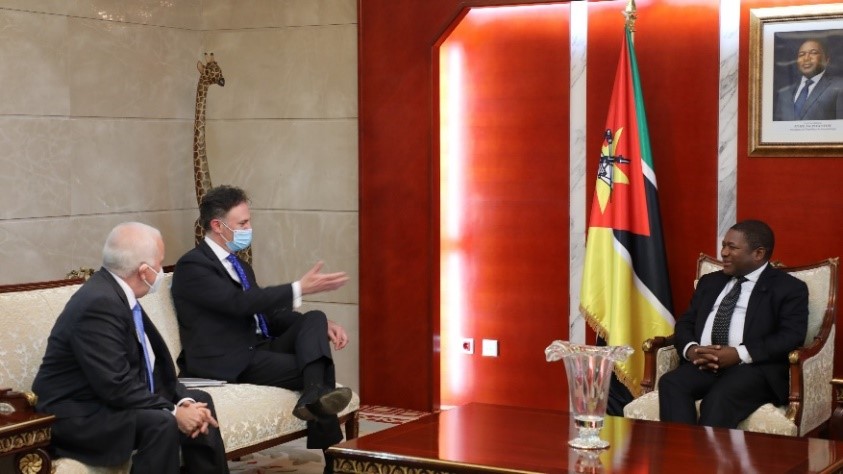 U.S. Ambassador Nathan A. Sales visited Maputo December 2-3 to reinforce the United States Government’s commitment to support Mozambique’s efforts to counter terrorism and violent extremism.  Ambassador Sales serves as the Coordinator for Counterterrorism, Special Envoy to the Global Coalition to Defeat ISIS, and Acting Undersecretary of State for Civilian Security, Democracy, and Human Rights.  He is the most senior U.S. Government official to visit Mozambique in 2020.

In meetings with President Filipe Nyusi and Foreign Affairs Minister Veronica Macamo, he emphasized the need for international cooperation to defeat the terrorists brutalizing and displacing civilians in Cabo Delgado.  “The United States is keenly interested in partnering with Mozambique,” he said, “deepening our friendship while we jointly confront the challenge of terrorism.”

U.S. Ambassador to Mozambique Dennis W. Hearne said, “The U.S. Government is committed to working with the Government of the Republic of Mozambique – as well as with other development partners, civil society organizations, and the private sector – to promote stability and strengthen the resilience of Mozambican communities affected by violent extremism and terrorism.”  He underscored the need to counter terrorism and violent extremism with security and development support, while protecting the civilian population and providing humanitarian assistance to those displaced by violence.

The U.S. Embassy has committed $42 million to humanitarian and socio-economic development projects in Cabo Delgado, complementing the priorities of the Agency for Integrated Development in the North (ADIN).  Additionally, through mobile medical teams funded through the President’s Emergency Plan for AIDS Relief (PEPFAR), life-saving health services continue for those displaced due to violence in northern Mozambique.  These efforts, and others, are part of the U.S. Government’s $500 million in annual assistance to Mozambique.